02 Apr Impressive street art on one of our warehouses

Euroports, Port of Antwerp and Treepack joined forces to creatively bring the port of Antwerp and its employees closer to the city. For this purpose, the facade of one of our warehouses on Vosseschijnstraat was given a colourful mural of no less than 680 m².

As the second-largest port in Europe, the port of Antwerp is the engine of the Belgian economy. With this mural, the port and all the people who work here are put in the spotlight in an inspiring way.

Euroports made large investments last year, the terminal on the Vosseschijnstraat was also included in this investment wave. We as a terminal operator do not only invest in machinery and cranes, but also in a pleasant environment for everyone. The 200-meter-long mural will brighten up this part of the port. From dockworkers to boatmen and from a captain to cyclists, they are all part of the Antwerp port and deserve a place on the facade.

The impressive eye-catcher shows in a unique way what both companies stand for: sustainability, diversity, and connection. A colourful sandpiper represents the local fauna and flora, while DeWaterbus and an inland vessel represent the mobility in the port. The Antwerp skyline, the MAS, and the Port House are also depicted, creating the link between port and city. The people are central in the artwork, as they are the ones who make the harbour run.

Group COO Erik Klönhammer: “As a company we play a crucial role in society. This mural perfectly expresses this role, beautifully portraying the integration with the inhabitants of the city, our employees, and with the port, our “raison d’être”. Our efforts towards the environment have also found a place in this work of art. It was truly a relief to be able to participate in this project in these difficult COVID-19 times with a positive and optimistic message! ” 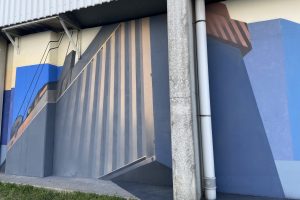 Port representative Annick De Ridder: “With this creative project we put our port in the spotlight in an original way, and we create a special landmark that you would not immediately expect in this area. For example, we focus on the unusual beautification of buildings in the port, and we can surprise passers-by and visitors.”

Treepack: “Street art connects people and when it is presented correctly, it creates a social-local basis and gives a new dynamic to our environment. For this art project, we went looking for artists who focus on biodiversity, society and sustainability. That brought us to the choice for the artists of Harmonia Gama. They combine abstract and contemporary art and visualize the link between the port, the living environment and people in the mural. ”