Rauma and seafaring have traveled together for centuries. Even today, port operations play a significant role in the wellbeing of the region in many different ways. Successful operations are guaranteed in part by the close cooperation between Port of Rauma and the port operator Euroports Finland Oy.

The port area of Rauma is an important channel from Finland out into the world. Although the shock of the coronavirus pandemic in the last year or so has been felt in the import and export operations across the world, the Port of Rauma has already risen back on its feet.

“The level of port traffic has been surprisingly positive during the summer season. The biggest surprise has been paper which has moved far better than expected. Compared to the previous years, container traffic is lagging a bit behind, but traffic as a whole has been better than we dared to expect,” Janne Virta, the Managing Director of Port of Rauma explains.

In addition to paper, pulp and sawn timber have been on the rise. The volumes in the port consist of cargo handled by the port operator. Euroports is experiencing busy times. Managing Director Sari De Meulder estimates that the volumes are even exceeding the estimations.

“At the moment, we are even talking about congestion because, like in other ports in Finland, the area at Rauma is full of cargo waiting for operations. The situation in Central Europe is even more frenzied. We could not have predicted this in February. The situation is positive,” De Meulder smiles.

“The container drought Janne mentioned will still be noticeable during the first half of the next year. We will have to see how the world recuperates, or if it recuperates back into the same state as it was before at all. The demand in some market areas, such as the U.S., practically meets the amount of goods we can process. 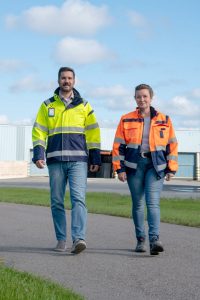 “Our businesses must support one another, and we need to go after the growth objectives in accordance with the strategy. The tough lesson we learned from the shutdowns of the Kaipola paper mill and one of the paper machines at the Rauma paper mill was that we need more diversity in our traffic flows. Kaipola was a massive loss in volume. We are talking about approximately half a million tonnes that we must now catch up on,” De Meulder says.

“In the long run, circular economy has a lot of potential. We have ecycled metal in the port area already, but we are talking about other materials as well. Another sector is battery manufacturing. Within the field, large projects are taking place in Salo, Uusikaupunki and Harjavalta. We are looking into the opportunities they bring along,” Virta adds.

Just like in all business, seafaring and port operations face their own challenges. These challenges are taken in a stride and both parties want to find solutions.

“For a few years now, we have been seeing small signs that the Finnish industry sector is heading towards some type of a transformation. Responding to the change is going to be its own challenge. Our operations need to be even more flexible,” De Meulder reminds.

In a way, Rauma can be seen as a logistic crossroads. On the grand scheme, domestic connections, and the connections from the seas of the world to the west coast are in place. Regional matters and infrastructure often rise up in discussions on the future vision.

“In the near future, within five years in our case, one of the most important things is to finish the expansions under construction in Petäjäs. In the long run, one land-related topic is Järviluoto. It was selected as the direction the port will be expanded to next. Large investments require active traffic and that the volumes in the port keep growing,” Virta emphasizes.

“At Euroports, we maintain existing infrastructure since nothing lasts forever especially in a port environment. We have investments running into millions in our pipeline. They include investments related to our sustainable development strategy, such as new LED-lighting for five of our storage facilities and transferring to hybrid cranes.”

Digitalization as a part of sustainable development

The world has changed enormously in the past few decades. Digitalization has become a part of everyday life, and life has become more hectic. While ships used to stay docked for a week, they now only stay for a few days.

“We have taken the first steps towards digitalization. We have done trials on smart shipping and started using the Port Activity platform with the other operators in the port. Everyone can, for example, see the arriving ships and their ETAs on real time, and order pilots,” Virta explains.

“The platform is already being used in twelve Finnish ports. With it, the process becomes more efficient and transparent. We are still in the beginning stages. We have used the platform for about six months, and we have been developing it constantly.”

You cannot forget about semi-autonomous traffic when megatrends are discussed. De Meulder and Virta note that the Finnish winter brings its own challenges.

“Norway has taken their first steps on semi-autonomous traffic, but it is not yet relevant here at Rauma. If we start seriously considering and realizing it, it will demand a lot from the fairways and all the operators involved in the chain,” Virta says.

With digitalization, operations can become more environmentally friendly. Safety and environmental factors are an important part of the daily operations in the port area.

“Sustainable development is measured everywhere. We have to be able to run operations with low emissions that are environmentally friendly in many ways. In addition to the machinery and infrastructure, as well as the lighting I mentioned earlier, we have to critically monitor our operations at all times,” De Meulder explains.

Port of Rauma employs 26 people, and Euroports employs approximately 400 people. Indirect impact on employment is many times higher which means that societal impact is significant.

“The age distribution of our staff falls slightly on the right side of normal distribution.

As a part of our human resources strategy, we are considering how we could bring the curve closer to the center. The generation is slowly changing, and we can respond to future recruiting needs with training. The tasks in the field are versatile which makes the work more appealing,” De Meulder says.

Next to the port, on the other side of the bay, operates Rauma Marine Constructions. The close proximity of the shipyard and the port creates efficiency.

“For example, arranging foreign sea transport is easy. Horizontal distances from the shipyard to the port and vice versa are extremely short for the components,” Virta reminds.

Janne Virta has worked as the Managing Director of the Port of Rauma since August 2021.

Before that, he worked for Euroports as the Commercial Director. The now-business partners are very familiar with each other.

“Our thoughts align well with Sari. Collaborating and discussing different matters is easy for us. Having an understanding on how the operator thinks and what they prioritize through my experience makes my own job easier,” Virta says.

De Meulder nods along in understanding.

“We cooperate really well. The port, of course, has their own interests that may differ from the operator’s, but that is how it should be. It does not mean that we could not collaborate in the areas where our interests meet,” De Meulder reminds.

“Both of us work hard to move things forward, and oftentimes we want them to move forward as quickly as possible. We think alike in that sense too.”

Virta and De Meulder have a positive outlook on the future. In part, the vitality of the business life and common wellbeing in the Rauma region relies on the active operations in the port.

“We have to work hard to succeed, but Rauma will be one of the winners,” De Meulder says. 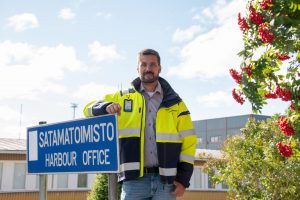 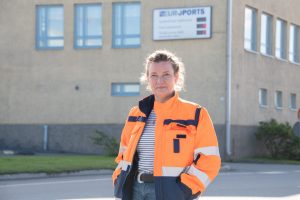