A state-of-the-art Mantsinen 200 harbour crane was commissioned at the Port of Pietarsaari in December. The crane will significantly increase the efficiency of Euroports. The fast working speed will serve the needs of today’s port operations.

With the new crane, we will be able to load and unload ships and increase our performance figures in all cargo types. In terms of production efficiency, we are talking about an increase of more than 10%, as the loading capacity will increase by at least 25%, says Operations Director Pauli Rautiainen.

The crawler crane is equipped with long booms and a high undercarriage and was assembled in the port area in the second week of December. It was commissioned for production use in week 51.
In practice, the increase in loading capacity means that with the new crane, we will be able to handle four packages of sawn goods at once instead of the current three. Similarly, the four packages of pulp that we can handle now will become six. The Mantsinen 200 was equipped with a variety of accessories to suit all cargo needs.

The nearly two-million-euro crane investment is important for Euroports Pietarsaari’s operations. With the new crane, the port will also be able to meet the needs of larger ships
calling at the port.

Our turnover is approximately 7 million euros, so this is a major investment that will take our operations forward. The investment reflects the Group’s confidence in the current and future profitability of the Pietarsaari unit, says Rautiainen.

Owing to the 11-metre deep fairway, Pietarsaari can also receive larger vessels, which require larger machinery. With a service life of about 20 years, the Mantsinen crane has a long life cycle.

With the new crane, Euroports wants to ensure our competitiveness and an efficient and high-quality level of service. We are now able to handle more cargo at once. We have received a lot of positive feedback from our customers about this investment.  The crane is equipped with a HybriLift system, which delivers financial savings and reduces emissions. Rautiainen emphasises that environmental friendliness is an important aspect of the port operator’s day-to-day operations.

The device charges its pressure accumulators whenever the boom is lowered, which helps reduce the load on the engine. Compared to traditional models, we aim to decrease energy consumption by up to 35%.

The investment decision was made in the summer of 2020. After that, the crane was built at the Mantsinen plant in Ylämylly, Joensuu, Finland. According to the initial estimate, the equipment was planned to arrive at the port during the Christmas week, so the crane was delivered a little earlier than expected. The assembly took four days as planned. The delivery and assembly required various arrangements from both Mantsinen and us. We had two mobile cranes at our disposal, which we used to transfer the machine parts to their installers, says Rautiainen.

Prior to delivery, the crane had already been assembled once at the factory, where test runs and official inspections were performed.
The machine weighs about 275 tons and was delivered in several parts by lorries. This meant that the process was also extensive in terms of logistics, as all parts were transported by land from Joensuu to Pietarsaari. The supplier’s personnel already trained Euroports’ crane operators during the installation
week. The training of operation and maintenance personnel is an important part of the safe operation of the equipment. We have a good starting point as we already have three cranes of the same type. Of course, the size will increase considerably, as the existing equipment we use include Mantsinen 100 and 140 models and Sennebogen’s hydraulic crane, Rautiainen.

Cooperation with the crane supplier ran smoothly from start to finish. Now we will start using the crane in our actual operation. We have now entered the 2020s, so to speak, and our expectations are high. 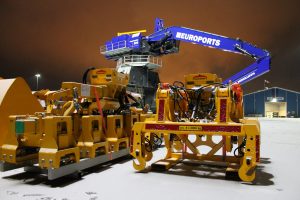